Baptiste Pierron and Camille Balanche are the DHI European Champions 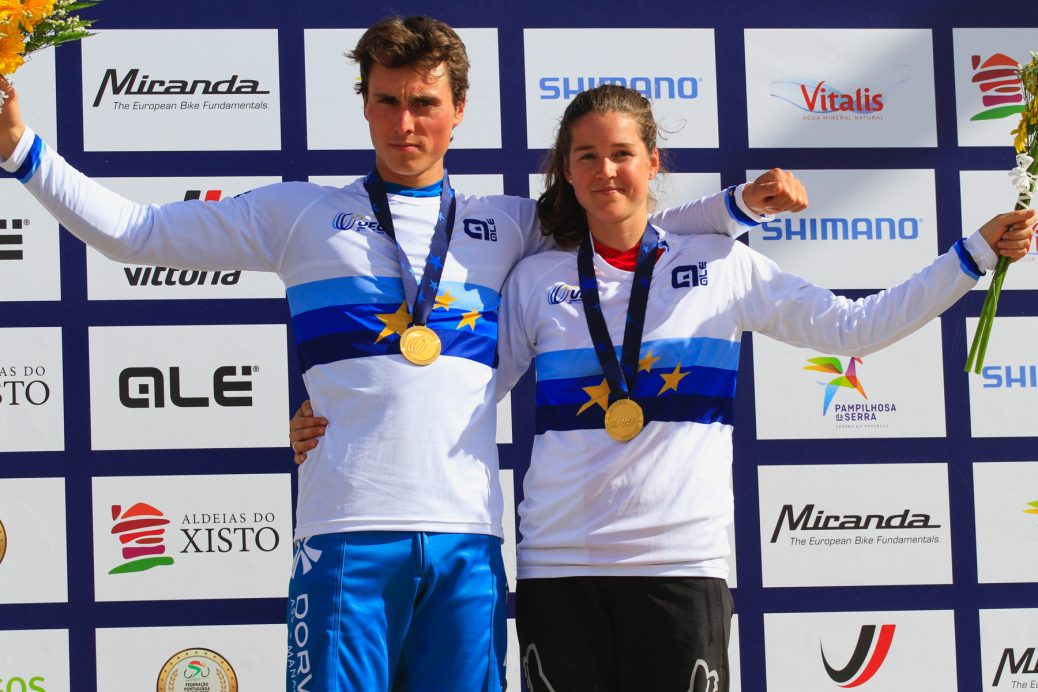 The men’s elite final had a very high level and an intense fight among the top three, separated by less than a second. Baptiste Pierron confirmed the status of main candidate, making the descent of 2090 meters in 3’13”501. Pierron’s compatriot and teammate Benoit Coulanges, who was the fastest in Saturday’s timed session, also improved his personal record, but today’s 3’14”313 only gave him the silver medal, at 0,812 seconds of the winner. The bronze medal was won by Austrian David Trummer, 0,825 seconds of the first.

“I am very pleased with the race I have made in this very demanding track, both in physical and technical terms, it is a track like those of the World Cup,” says the new European champion.

Portuguese Gonçalo Bandeira was the best junior in the competition. “I wanted to fight for the overall victory. I think without the fall I could be among the top elite. But we have to move on, thinking about the World Championship. This is my first year as a junior and I’m still learning. I have to work more and more to achieve good international results”, said Gonçalo Bandeira.

The women elite competition was even more balanced than the men’s downhill. Switzerland’s Camille Balanche won the European title thanks to the time of 3’41”609, 0,063 seconds faster than the last year’s European champion Monika Hrastnik. The third placed was achieved by the Italian Veronika Widmann (Insync Racing), 0,189 thousandths behind the winner.

“The track was difficult because it gave you the feeling that you were not fast enough, causing you to take risks and make some mistakes. But in the end, I was very fast and I am very happy with this victory, which I did not expect when I arrived in Portugal. But in training I gained confidence and realized that I could be at the podium. Today I did my best and I won”, said Camille Balanche.

Portuguese stand out in the masters

The Portuguese veterans were in good shape in this European Championship, winning five gold medals, two silver and one bronze. Daniel Pombo (Cycle Madeira Clube Desportivo) was the fastest of the masters 30, descending in 3’24’746, 0,338 seconds less than the Spanish Manuel Pellon (BDM Bike Club). The third, at 4.401s, was the German Benny Strasser (Magura Santa Cruz).